The years-in-the-making Evangelion: 3.0+1.0 finally has a release year. The movie is slated for 2020 in Japan.

Currently, the movie does not have an international release date.

The release date was announced during movie previews starting today, including the previews before Mamoru Hosoda’s new feature Mirai of the Future. 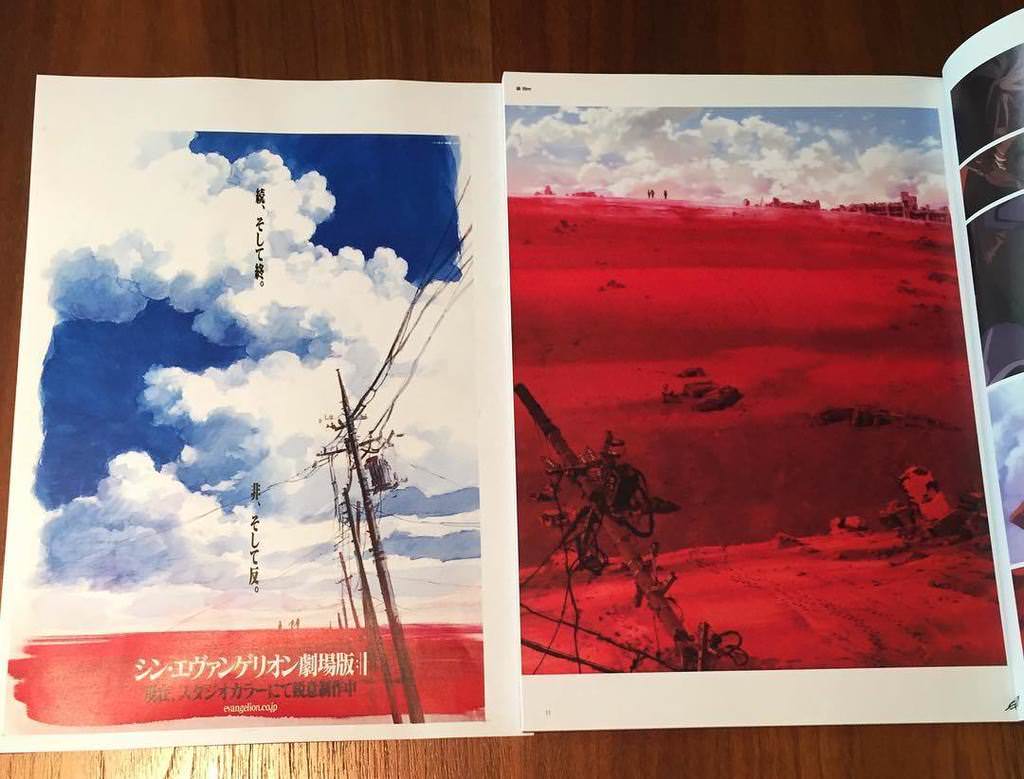 Here is some artwork for the eagerly awaited anime.

Evangelion: 3.0+1.0 is slated to the fourth and last entry in the Rebuild of Evangelion series. Evangelion: 3.0 You Can (Not) Redo, the third entry, was released in 2012.

The upcoming entry was supposed to be out sooner, but Evangelion creator Hideaki Anno got busy with his live-action Godzilla movie—something for which he apologized.
source did see a trailer/teaser on youtube but it got content spanked out of existence, wierd as its a trailer for it & you'd think they'd want lots of people to see it.

So expect the official English subs on a Heng Kong version about 12-18 months after that release date probably & another 6 months at least for it to make it to the west, least the news means they aint forgotten it
Top

After all of the (not)s. I was hoping the last one would be called 4.0 you can (not) understand.

Also one of my friends told me he was watching the original series for the first time recently. I felt like a massive dick for saying “congratulations” and nothing else!
For some reason they call it Dry July. Because it rhymes.
We should call it what it is.
The Crap Earth Sobriety.
Top

an admittidly low quality version of the trailer, not sure how long it'll live as the one I saw yesterday was already down by the time I knew about it existing

Eva Vs Xenomorth from the look of those arms
Top

I expect cam footage to appear shortly after
Top

OK so the subs are in french but thats what there is atm, most can probably follow much of what happenms in it anyway

pictures not as great but at least theres English subs

OK... So I'm a little pissed.
not to do with 3.0 or 4.0 You can (NOT) Understand, BUT I've been watching Evangelion on Netflix (recently added to Aussie netflix).
THEY HAVE FUCKED THE DUB.... I MEAN THE ENGLISH DUB HAS BEEN BUTCHERED.
Like when a person who understood the original heard the English one and thought IT had been butchered.
Take that feeling and multiply it by 10...
They've SERIOUSLY FUCKED what the show is... And this new dub is presenting to anyone watching on netflix that THIS is what the show was...

Kaworu doesn't say to Shinji, "I like you" like the new DUB... He FUCKING SAYS I LOVE YOU. They're misrepresenting it start to finish, and this scene is the highlight of the lot.
"I like you" when you're naked and showering with another man means something different than "I'm saying I love you"

The whole dub is FUCKED, and the place most apparent is in episode 24...

It's really, really, REALLY sad that people watching this classic on netflix will think that this is what it is supposed to be like...
DISGUSTING...
I don't know what makes me more mad or sad. The fact that Neon Genesis was the first anime I'd ever watched and has now been ruined beyond redemption.
Or that people watching might not know that what they're watching is a fucking shadow of what the series was TWENTY PLUS FUCKING YEARS AGO!

NO...
"Kaworu said that I was worthy of his grace"
NO KAWORU SAID HE FUCKING LOVED YOU..
It strikes me as REALLY odd that the whole world is going fucking batshit to add LGBTWTFBBQROFLCOPTER+++++ characters to ANYTHING just because they fucking can, and they remove the best scene that's been made in 30 years...

EDIT: And I didn't even mention from the new dub... "not qualified to be second children" "I am the fifth Children"... THAT DOESN'T EVEN MAKE FUCKING SENSE...
I AM THE FIFTH CHILD... Well that makes sense....
I AM THE FIFTH CHILDREN... WHAT THE FUCK ARE YOU TALKING ABOUT???? ENGLISH MOTHERFUCKER, DO YOU SPEAK IT???
For some reason they call it Dry July. Because it rhymes.
We should call it what it is.
The Crap Earth Sobriety.
Top

After addressing the runtime of Evangelion: 3.0+1.0 Thrice Upon a Time, studio Khara has returned to announce the release date of the fourth and final film in the Rebuild of Evangelion tetralogy. Originally set to open in Japan June 27, the premiere of the highly-anticipated film was delayed due to the outbreak of the Coronavirus pandemic.

Offering another look at Evangelion: 3.0+1.0, the third trailer is scored by a somber version of Shirō Sagisu’s “Peaceful Times (choeur) =3EM32=” performed by a children’s choir which reaffirms the expected nature of the film. The 36-second teaser gives us a brief glimpse of the fallout following the events of Evangelion: 3.0 You Can (Not) Redo along with cuts of action. Amidst the scenes, we get a look at new plugsuits worn by Asuka Shikinami Langley and Mari Makinami Illustrious, and new EVA units like the updated Evangelion Unit-00. At the end, the trailer reveals an official release date set for January 23, 2021.

Watch the new trailer above and for those that can’t wait for the release of Evangelion: 3.0+1.0 Thrice Upon a Time catch the first 10 minutes of the film released a few months back
source
Top

delayed in Japan again so its pushed back everywhere obviously

well so much for that first 12 minutes being available for a while, saw a bit yesterday & thought I'll grab it off youtube later only for it to be taken down, fortunatly I found nyaa to be rather usefel & theres even a subbed version floating around certain back alleys
Top

Well this is unexpected

The film will stream with dubs in 10 languages including English, French, German, Portuguese, Spanish, and Italian. The film will also stream in Japanese with subtitles in 28 languages.

In addition, Amazon Prime Video will stream the first three films: Evangelion: 1.0 You Are [Not] Alone, Evangelion: 2.0 You Can [Not] Advance, and Evangelion: 3.0 You Can (Not) Redo in over 240 countries and territories.

The film opened in Japan on March 8. The film ranked #1 in its opening weekend. The film sold 2,194,533 tickets for 3,338,422,400 yen (about US$30.6 million) in its first seven days in 466 theaters in Japan. The film sold 33.6% more tickets for 45.1% more yen than the previous Evangelion film during their respective first seven days. The film earned the equivalent of US$3.4 million in 38 IMAX theaters during its first seven days— the second-highest opening week for IMAX screenings of a domestic title in Japan, behind only last year's Demon Slayer – Kimetsu no Yaiba – The Movie: Mugen Train. Evangelion: 3.0+1.0 also played in 82 theaters equipped for 4D screenings.

In its third week, the film surpassed the domestic earnings of Evangelion: 3.0 You Can (Not) Redo, which earned a total of 5.3 billion yen. The new film is now the highest-earning film in the series domestically and internationally.

The staff had delayed the film from January 23 to March 8, after careful consideration due to the new state of emergency declared in four prefectures in Japan on January 8, and then extended to a total of 11 prefectures. The film had an earlier delay due to concerns over COVID-19 and its spread inside and outside of Japan. The film was originally scheduled to open in Japan on June 27, 2020.