When the KLF eventually became stars it was via their “Stadium House” trilogy of singles – “What Time Is Love?”, “3AM Eternal”, “Last Train To Transcentral” – and these are what they’re best remembered for now. All three are terrific: total pop, high-impact, hook-soaked spectacles, designed and unleashed as pure event. Here’s “What Time Is Love?”, the first of them.

In the context of 1990-1991 pop, these singles were both desperately needed and inevitable. The UK charts at this point were a battleground and the issue was the legitimacy of ‘dance music’ – house, techno, rave, and their (even then) brood of sub-genres. For its fans, this stuff was reinventing British pop culture – it was the most inventive, exciting, utopian thing to happen in their lifetime. For its detractors, dance music was destroying pop – the music was repetitive, content-free, faceless.

For Brit critics and media gatekeepers, dance music created a dilemma. This, clearly, was it, the Big One, the transformative “youth movement” a decade plus of mythologizing punk rock had left them trained and ready for. The ones who liked it fell into evangelical frenzy, some are still living off it now. But a lot of others felt alienated and left behind, and there was another problem, too. Dance music and the support structures of the UK pop establishment – the press, the charts, TV shows like Top Of The Pops – really weren’t adapting well to one another.

Dance fans – huge generalisation here – cared more about going out than about reading magazines, or dreaming about stars, or even buying records. But the rest of commercial pop was pitiably weak. For the 52 weeks of 1991, no fewer than 36 saw a film or TV tie-in top the UK charts. The best – “The Shoop Shoop Song” – had a bit of gusto but that could hardly disguise a moribund music scene.

Club culture was the only interesting game in town but it was turning off as many as it seduced. So press and TV latched onto anything which promised to translate dance music into terms they could relate to – playing up singers’ star quality, getting excited about fusions with indie, jumping onto hot concepts like a dog on a sausage. The KLF were absolutely beneficiaries of this.
Top

Leisha Hailey and Heather Grody (Reid) began performing as The Murmurs in 1991 while the duo were both students of the American Academy of Dramatic Arts. They released Who Are We, produced and released by William Basinski's Arcadia Records, in 1991. The band became popular around the East Village in Manhattan. In 1994, The Murmurs signed with MCA Records. They released their self-titled major label debut album the same year. Their single "You Suck", got radio airplay and gained them national attention. While the song reached number 89 in the United States, it was a number-one hit in Norway, reaching Platinum status.
Top

"Los Angeles" is a single written and performed by Black Francis, it was the first track on his solo debut album Frank Black, released in 1992. It served as the main theme song for the short lived but cult phenomenon VH1 talk show Late World with Zach. It was also featured in the soundtrack of Tony Hawk's American Wasteland as well as being featured in Yeah Right, a skateboarding video directed by Spike Jonze with professional skateboarder Eric Koston skating to this song. Also, a music video was made for this song featuring Black himself. The music video was featured on an episode of MTV's Beavis and Butt-head.
Top

25 years ago this week in the Australian charts! 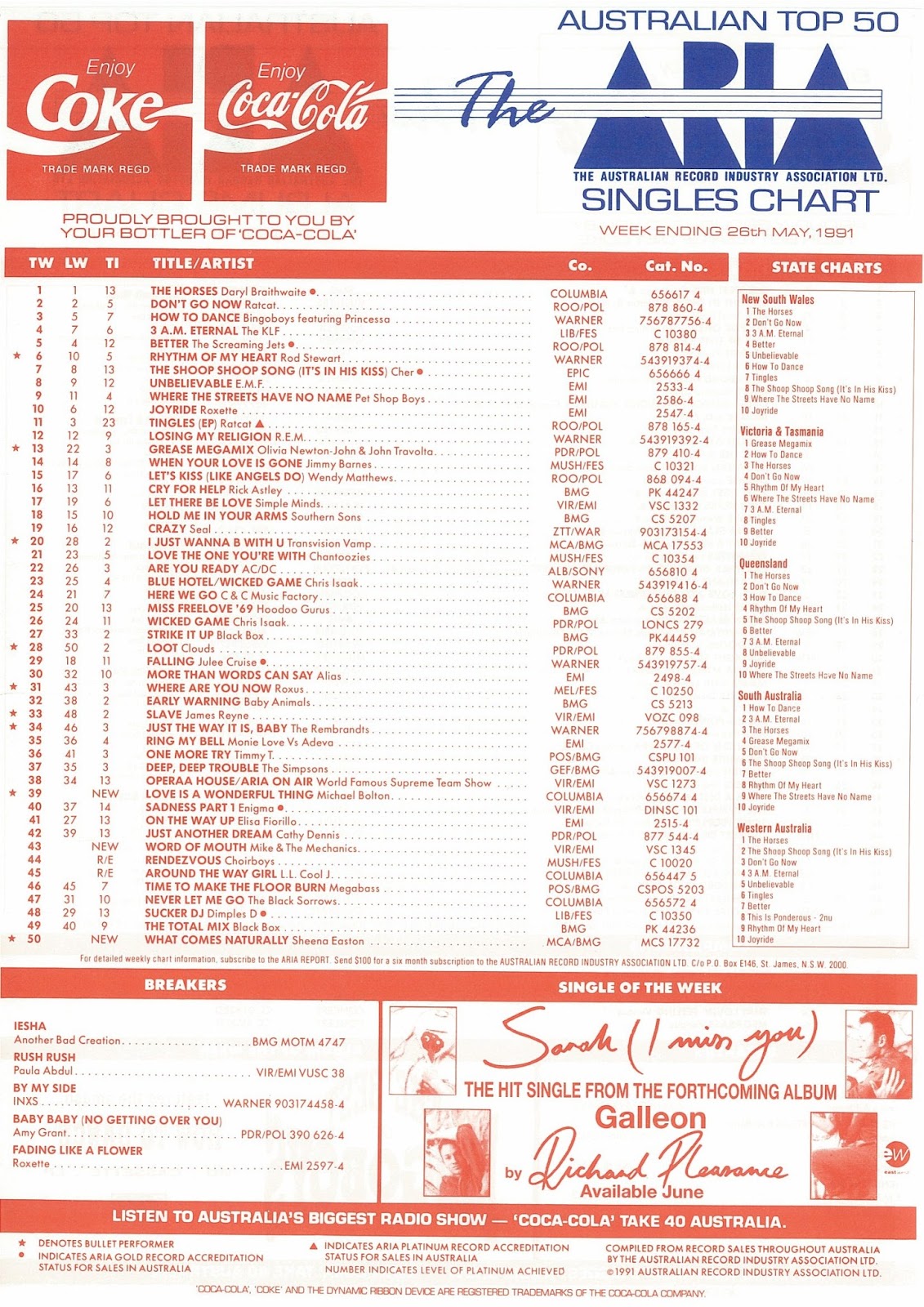 Ratcat were a bit of an odd band. They had two number 1s within a few months of each other, their next single got to 21 and then never really had another hit. And they sounded like The Ramones.

Ratcat - That Ain't Bad (main song from the Tingles EP)

This song has been getting played a lot this year due to it being in an insurance ad and it's also been played at a few AFL games for some reason. The chick in it is quite nice looking but she's not the singer, the real female singer is Margaret Urlich. And a Google of Margaret Urlich brings up an article about why she wasn't in the video that was posted 2 hours ago. Nice timing.

25 years later, one question remains: Why wasn’t Margaret Urlich in the video of The Horses?

IT’S the mystery that has surrounded Daryl Braithwaite’s timeless hit The Horses, which was No. 1 hit in Australia 25 years ago this week.

However Urlich declined to appear in the video, with model Gillian Bailey miming to her vocals.

“I was nicknamed Gilli Vanilli for a while,” Bailey said.

Urlich now regrets being absent from the video which has done for Braithwaite’s career longevity what You’re the Voice did for John Farnham.

“I was recording an album in London when they did the video,” Urlich said. “I could have come back to do the video but I was doing my own thing by that stage. A lot of people know it’s my singing, but they don’t put two and two together that it’s not me in the video.

“In retrospect it was probably a little bit silly because the song was so huge. But at the time I was young and a bit stupid, I did what I thought was right. But it was absolutely no disrespect to Daryl.”

It has since become an anthem that has been discovered by new generations, with Braithwaite’s concert audience now including an influx of punters who were kids when The Horses was a hit first time around.

The song has been used on several TV ads, sung by reality TV contestants and used by a legion of sporting teams and at countless horse racing events. Braithwaite’s live version, including crowd participation, can stretch over 10 minutes in concert.

“The ongoing success of The Horses still puzzles me, apart from the fact Rickie Lee Jones wrote a great song,” Braithwaite said. “I’ll finish a gig and think ‘My god, I’m 67 and all these young kids are singing The Horses and reaching out their hands to touch me’. It’s absolutely lovely. I don’t think there’s any other job you get that sort of feedback. It’s incredible.”

She never really had a big hit single but her albums did OK. Here's one of her bigger charting singles from 1990, a fairly crappy song that features very shitty dancing.

Margaret Urlich - Number One (Remember When We Danced All Night)

Didn't KLF set fire to a ton of money as a publicity stunt?

Edit: Wait yea they did, a million pounds!!!

Here's a doco about it.

It's funny looking at the comments in the videos, some people are still pissed about it.

Tears For Fears - Laid So Low (Tears Roll Down) 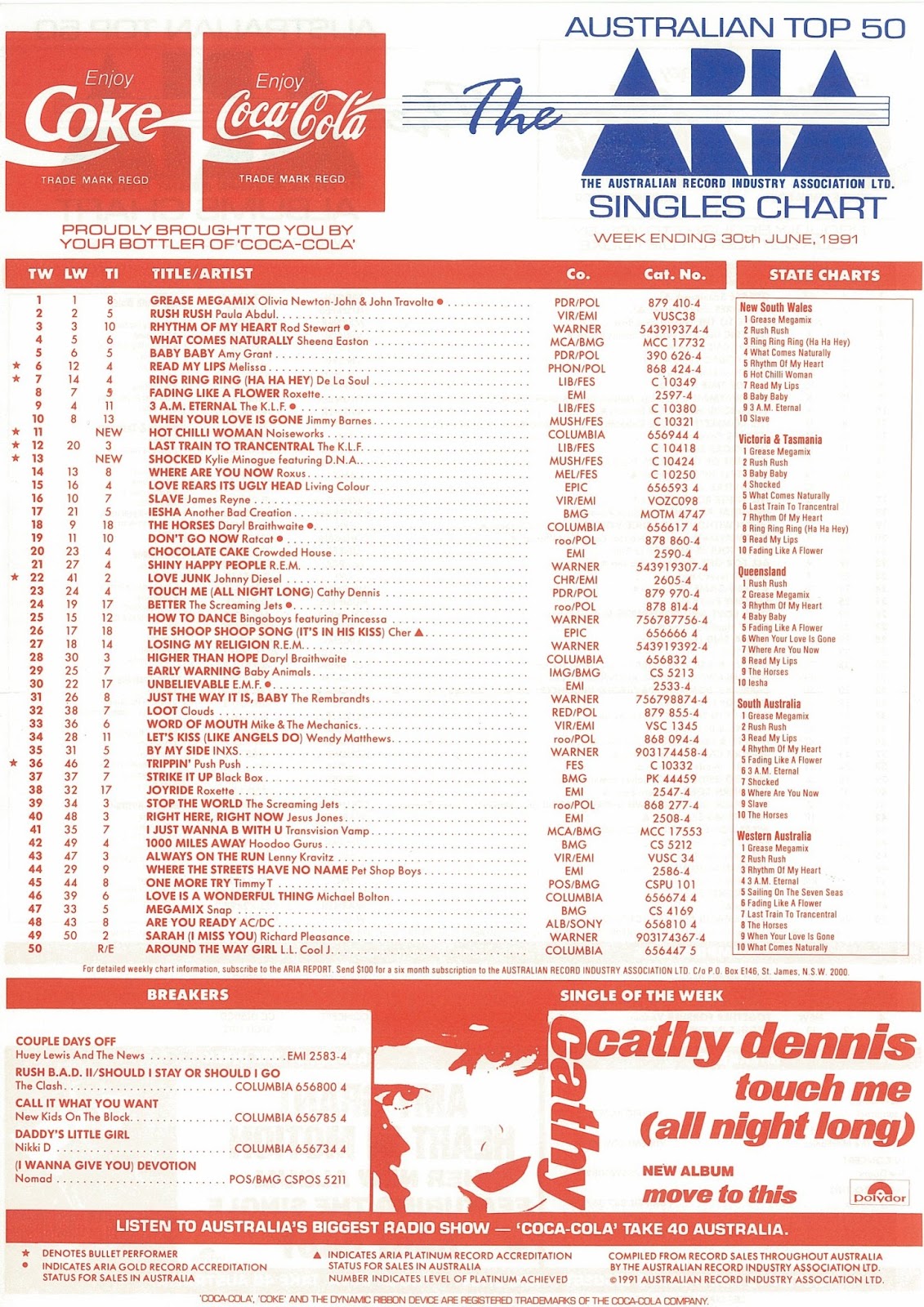 This first video is probably Simon Baker's proudest moment. It did end up going to numero uno though.

Electronic - Getting Away With It

Jamiroquai - Too Young to Die

What's at the end of Satan's rainbow?