Wow Zoidberg, you’ve really spruced up your garage, and cartooned it and all.

But where is the rest?
If I should Die Hard Arcade before I Alan Wake.
PREY the Lords of Lore my Soul Calibur to Take-Two Interactive.
Top

But where is the rest? 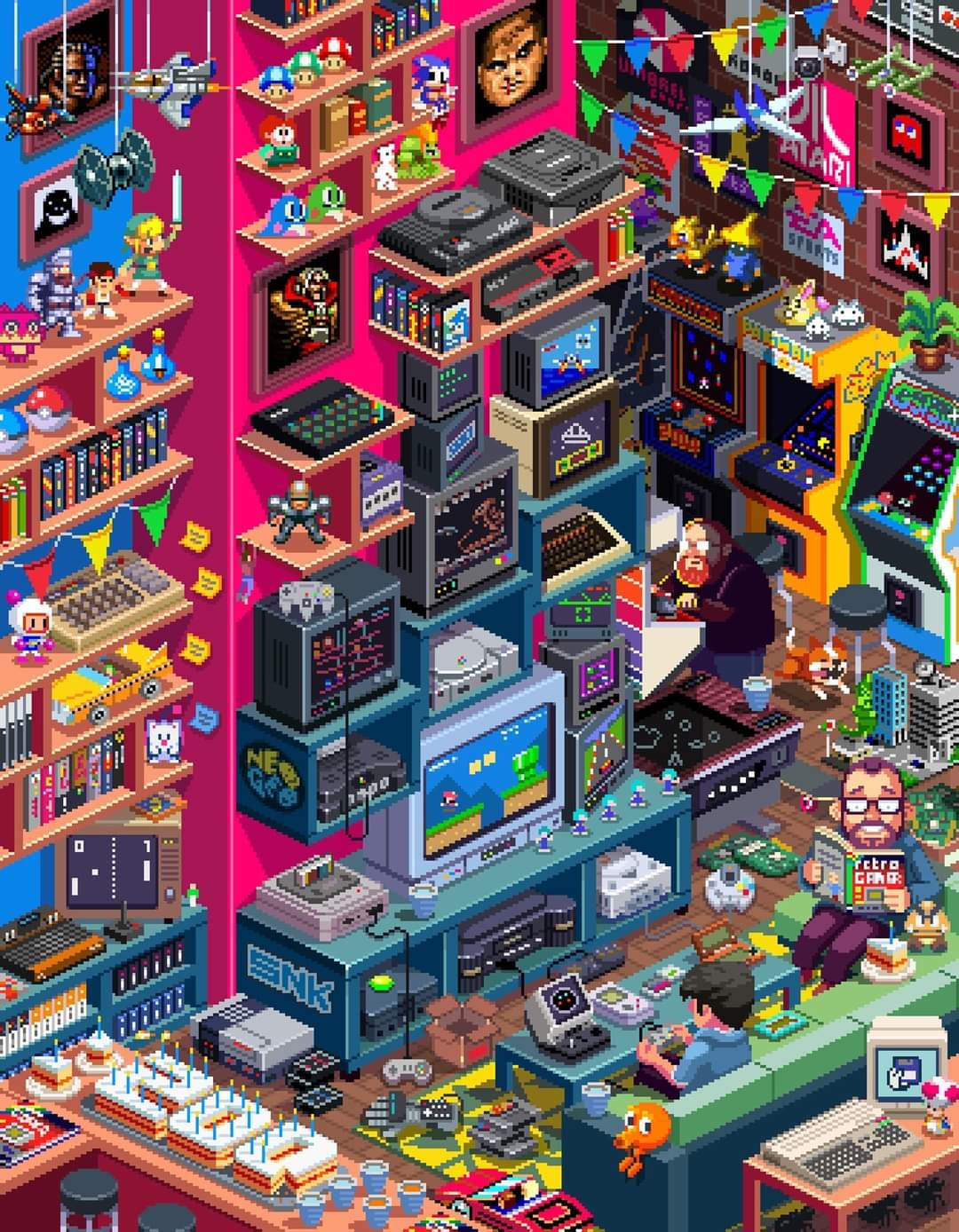 Imagine someone wanting to play that Saturn? "Hold up, let me get my 20 foot ladder out"
Top

Don't be silly... NO ONE wants to play a Saturn!

And if Zoidberg did want to play it, he wouldn't use a ladder like a moth in a bath... He'd get silverback, and they'd set up an elaborate real world Donkey Kong run.
If I should Die Hard Arcade before I Alan Wake.
PREY the Lords of Lore my Soul Calibur to Take-Two Interactive.
Top

I don't have stuff in the garage anymore, because I moved houses. It's all in a separate room.

Also I don't have a 3DO, and even if I did it would be in that position.
Top

You'd need a fing-longer to hit those power switches 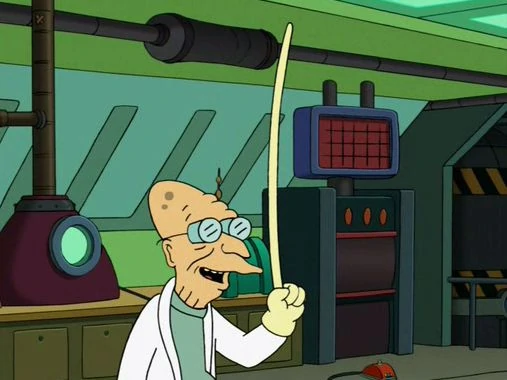 Handheld Legend has started selling a TV-out kit for the GBA, which looks really promising: 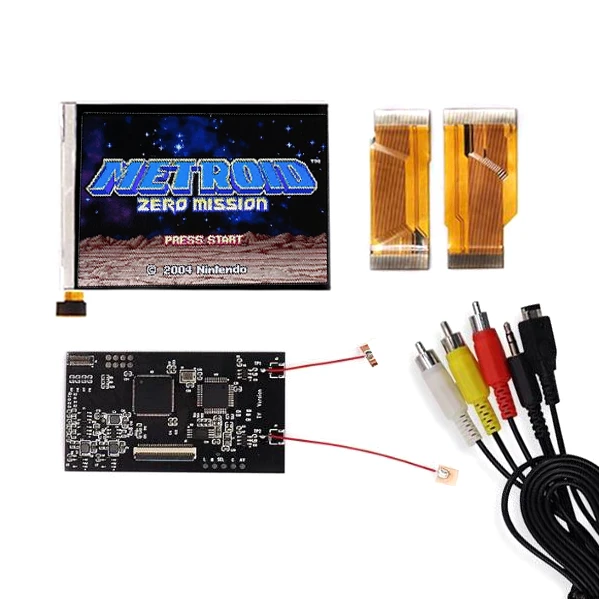 I installed one of their IPS v2 screen mods in an, and the thing is amazing. Other than the crappy D-pad, the original GBA is my favorite handheld now. An Everdrive will play GB/GBC/GG/SMS at the correct aspect ratio, too, as well as some janky NES action as well.
Top

The original GBA didn’t have a crappy D pad.
It was just a little on the small side.

That dpad only became crappy when they mounted it on the GameCube where upon its size became comical.

You must be thinking of the gba SP AND DS for crappy d pads.
If I should Die Hard Arcade before I Alan Wake.
PREY the Lords of Lore my Soul Calibur to Take-Two Interactive.
Top

Here are a few things I know are absolute truths on a universal scale:

Now wait, I say that while believing it's better than the SP. I just want a touch more tactile feedback from the membranes.
Top

"Wouldn't be in that position" not would.

We got what you meant.

Not even Trip Hawkins would put a 3DO front and centre even when he was selling it...
If I should Die Hard Arcade before I Alan Wake.
PREY the Lords of Lore my Soul Calibur to Take-Two Interactive.
Top

The biggest problem was that BUG! kept spitting issues out any time I tried to burn it... something about the cue sheet something something...
Tried different discs and different burner, still the same problem, so I looked it up and found some drives have problems with tracks less than 4 seconds. put the image onto my old ass XP build and it burnt instantly with no issues.

All the games are backed up, bar one. (SAGA) and now I'm going through and doing covers and manuals.

DSCF0354.JPG
DSCF0355.JPG
DSCF0356.JPG
soon there will be a full stack, and I'll play legit saga, then confirm the backup works fully as it should.
You do not have the required permissions to view the files attached to this post.
If I should Die Hard Arcade before I Alan Wake.
PREY the Lords of Lore my Soul Calibur to Take-Two Interactive.
Top

Taito is releasing its own mini arcade cabinet next March

The Verge wrote:Taito is the latest Japanese video game publisher to resurrect old hardware in mini form. The company behind Space Invaders, Bubble Bobble, and many more arcade classics has just announced the Egret II Mini, which like Sega’s excellent Astro City Mini is a shrunken-down version of a popular arcade cabinet.

The original Egret II was released in the ‘90s, and its key feature was the ability to rotate its screen 90 degrees so that games with tall aspect ratios — like Space Invaders and other shooters — could be played in tate (vertical) mode. Appropriately enough, that feature is present on the Egret II Mini, which has a 5-inch 4:3 LCD that can be played in either orientation. 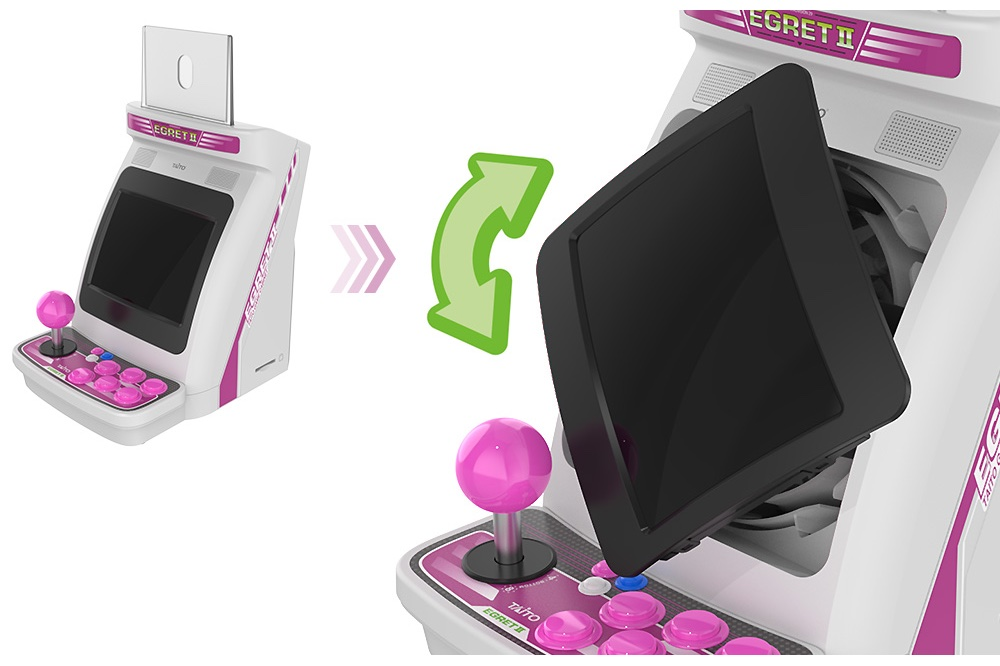 The Egret II Mini’s primary controls include six primary buttons and an arcade-style microswitched stick that can be adjusted from four to eight directions depending on the game. There’s also an optional expansion controller that includes a paddle input for games like Arkanoid, as well as a trackball for the likes of Cameltry.

Here’s what the controller looks like. It’s 240 x 100 x 48mm, so it looks pretty substantial — somewhere between a traditional gamepad and fighting stick in size. 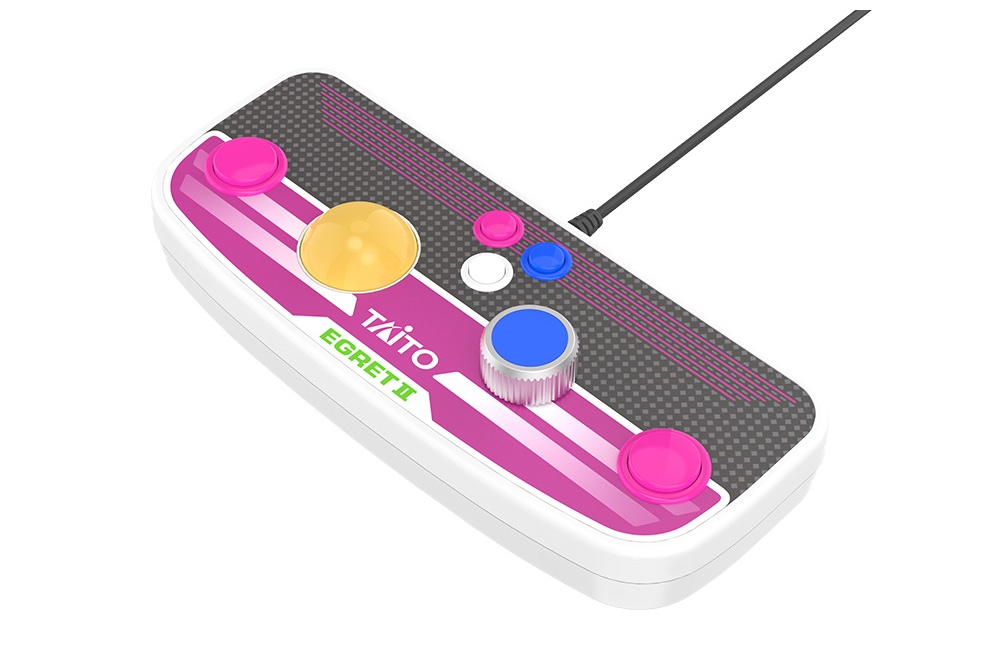 Taito is also selling a gamepad and an additional arcade stick as optional extras:

There’ll be 40 games preloaded on the cabinet itself, and the expansion controller also includes an SD card with ten games that use the paddle or trackball. Here’s the list of titles that have been confirmed so far:

The paddle/trackball games so far confirmed for the bundled SD card include:

Beyond the SD card slot, the Egret II Mini also has a USB-C port for power, two USB-A ports for controllers, an HDMI port for TV output, and a headphone jack.

At least there’s time to save up your yen — the Egret II Mini won’t ship until March 2nd 2022.

It looks cool and it's a decent lineup of games. A bit pricey though.
Top