Well 2018 is almost over so let’s go back and take a look at some of the highlights of the year.


In January Mad Catz was re-established.
For those who love sub par peripherals and cheap plasticy feeling wheels, 2017’s bankruptcy may have been a kick in the face.
But there was no need for alarm because almost as soon as we were free, they came back.

Yuji Naka Had had enough of doing his own thing since leaving Sega in 2006 and Joined Square Enix.

Then nothing of Note happened till E3 in June.
EA delivered a huge middle finger to RTS gamers the world over by announcing that Command and Conquer would be a mobile game.
The game came out this month and not a single fuck was given, but at least this was the worst gaming could get in 2018 No one could alienate a whole fan base as much as that…
Devolver Digital followed up their Amazing 2017 E3 conference with another amazing effort.

In August. A mass shooting happened at a madden NFL tournament…
This was to be expected, if people play EA sports games, of course they’ll get violent at playing such shitty games.

In September. Telltale games shut down and dicked over most of the staff.
Many were surprised, as telltale had done mostly good games, but had also turned out a few buggy pieces of crap that people still loved for some reason.

In November. Blizzcon was held in California where blizzard announced to hardcore dedicated fans that had paid lots of money to be there that Diablo was going to be a mobile game! And not just that, it was going to be a reskin of another mobile game, and not just that, when booed by the crowd, the people on stage said ‘you guys have phones right?’ This event gave rise to the lowlight of modern gaming, where a fan asked ‘Is this an out of season april fools joke?’ and you could see his heart was actually breaking as he asked the question.
If EA flipped gamers off with C&C, Blizzard flat out spat on them, before shitting into their hands and throwing the shit in gamers faces and then using their shit covered hand to forcibly fist every gamer there.

Prima games also announced they are to be shutting down after 28 years.. Turns out people don’t want to pay $30-40 for a book to a game that cost $60 and can be covered by every gaming website within hours of release for nothing.

This month. Capcom introduced Bonuses for allowing in game ads in street fighter 5.
I am speechless… There are no words to express how this makes me feel... Even Capcom are fucking up.
Of Course there were a tonne of remakes and re-releases like Spyro and Shenmue. And a Nintendo switch version of every game you played 3-5 years ago.
And the Switch versions cost the same or more than they did 3-5 years ago.

2018 is the first year that EVERY single game released had a day one update!

Sega set a world record ‘The most amount of remakes no one gives a shit about’
2018 was the year they finally released their 4,000th fucking megadrive collection…
3500 are on every console known to man, and 500 are on shitty plug and play ATGAMES consoles that are worth about $5…

Sony Tried to cash in on the “Small mini retro consoles fad” That Nintendo do well, and Sega outsource to people that do poorly.
Sony Did it even worse than Sega.. They picked games that don’t represent the brand at all, and they’re poorly emulated, at a ludicrous price, and even collectors don’t want them.

Battlefield 5 has finally become no different to COD. Also tanks fix themselves with magic fairies now...

Fallout 76 exposed Bethesda as the bug riddled, shitty developer they’ve always been.. Also something about Garbage bags because $5 of canvas is too expensive for people paying $200 for a shit game..
If a game is shit, you at least want a nice bag so you can pack up and walk away from it..

Following a 5 year long early access period, DayZ was officially released… into version 1.0, AKA BETA (Yeah I was surprised too, I forgot about the game in 2014 like everyone else)

Rockstar released Red Dead Redemption 2. Not a new GTA because 5 is still selling after more than 5 years somehow…

Nintendo released Mario Tennis, Mario Party and Super Smash brothers Ultimate, All good, and worth the asking price, but in 5 years when they still cost exactly the same price it’ll be a bit bullshit, but for now, all good Nintendo, It's samey, but at least the games fucking work and don't have updates every 3 fucking hours... Keep up the good work.

In the 1 day left of the year, I am sure nothing can go super wrong.. So I’m calling it now.. I had more fun watching all the drama and people raging than I did playing games from 2018, But I guess in 2019 every game that was ever any good will be on mobile anyway.

What are your highlights and lowlights for the year?

What should this years motto in gaming be?
I Propose one of the following:
2018: an out of season april fools joke
Hank Azaria not playing Apu on the Simpsons will make the role as irrelevant as the Simpsons has been as a series since 1999!
Top

Here's a meme I made for you. 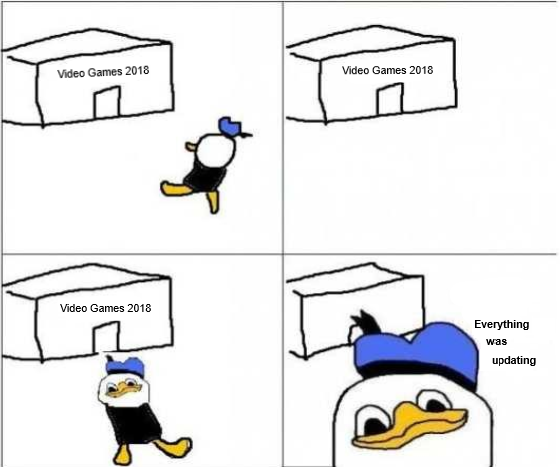 Since Ian pretty well hit on the big points of the industry, I’ll summarise my personal year of gaming instead.

-I played a whole lot of old games and became sad that I didn’t play them in their prime (Lufia 2, Shenmue, and Undertale are the big ones I can recall).

-Nintendo convinced me to rebuy too many of their Wii U games on Switch for no real good reason.

-PC gaming this year was a bust as I barely played anything on my PC this year. Unless you count Project Stream, which brings me to...

-I found out that the new Assassin’s Creed games are actually amazing again. Odyssey is perhaps the best new game I’ve played this year and Origins is supposed to be equally good.

-I bought a PSVR and was somewhat disappointed. But with some of its best games releasing late in the year, I have now started to enjoy it.
Top

Don’t be sad because you didn’t play games in their prime.
It just means that when there’s nothing to like about modern gaming you still have something there.

I didn’t get a ps2 until the ps3 was out... while uncharted games updated I could go back 4+ years and play Jak and daxter and ratchet and clank and just enjoy the games.

I too was looking forward to my psvr, couldn’t handle wipeout so assumed I can’t handle any VR.

Sometimes it takes something special to show you that despite EVERYONE making you want to hate gaming there are sparks there to remind you that it’s enjoyable.


For me one of my friends told me about Diablo.. he’s a massive blizzard fan (paid to watch the blizzcon stream) and when he was telling me that story about it how they could fuck over loyal, dedicated fans that much it honestly saddened me..

And I felt the same way when Microsoft said rareware were making Kinect games... I knew he was feeling that a part of his spirit was being crushed and it reminded me of the thing I thought when sega discontinued the Dreamcast to focus on shovelware... why make great when good sells better.
Hank Azaria not playing Apu on the Simpsons will make the role as irrelevant as the Simpsons has been as a series since 1999!
Top
Post Reply
4 posts • Page 1 of 1