On probably the worst night ever to show a white guy with a criminal record being peacefully arrested and quickly released from custody.
Top

Not good for AEW.
Top

From what I gather, TNT is only really concerned about the 18-49 demographic. A lot of viewers switched to NXTs main event with Sasha vs Io too (900,000). Thing is with WWE they can play the Ace card at any time and have the main roster stars turn up in NXT. WWE are the ones counter programming too (putting the Bash against Fyter) so if AEW gets back on a role again I think the ratings will go back in their favour.
Top 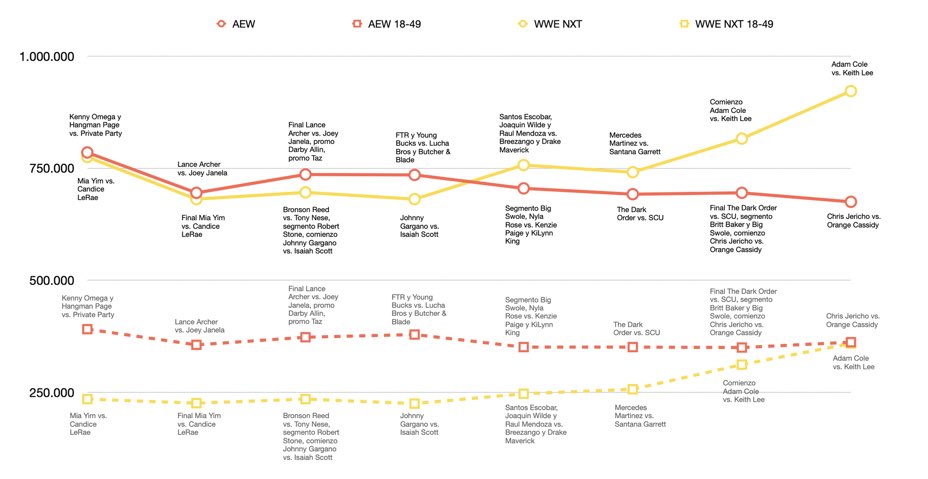 In terms of total viewers, NXT won the latest installment of the Wednesday Night War, averaging 759,000 viewers to AEW Dynamite's 715,000.

Its weird how AEW went from 1.5m viewers to less than half that now. On the whole their shows have been good, some really good, so it's not a question of the shows being bad. If NXT wasn't up against them I'd imagine they'd be doing a 1m + viewers each week.
Top

Both shows are cancelling each other out. Which hurts AEW.
Top

Yes that has to be the reason. But today with DVR's and on demand services you really don't have to watch it live like back in the 90s. NXT moving from the Network to USA Network really was a petty move on WWEs part. If they let AEW run without opposition and their ratings were a steady 1m+ then surely competition is good for the wrestling business.

The more non-fans who check out AEW are likely to seek out other wrestling but what WWE has done has made it a choice between them (with NXT) and AEW. I also believe their lack of creating stars was really detrimental to the evolution of the business.

Only really John Cena and arguably Becky, maybe you could add Roman, are the only stars they've made since the end of the Monday Night Wars. Which say AEW was set up in 2001 they could have brought in Hogan, Goldberg, Hall & Nash etc and created a real viable alternative. Plus you had guys with name value from the 80s, early 90s that had some degree of mainstream appeal because of the Rock & Wrestling era.

Now only if CM Punk came in to AEW would it create much of a buzz. But more so with the lapsed fans. Even then though its been years since he wrestled and his appearances on Backstage didn't really generate that much interest. What Tony and the guys need to do is to find their lane and if things do pick up ratings wise find their winning formula and not concern themselves with what WWE and NXT are doing.
Top

It was petty by WWE but they did get a lot of money for NXT to appear on USA, which has made NXT profitable for the first time, so it was a good business move by them.

AEW will pull ahead of NXT in the ratings eventually, it might take a few years to build a decent gap though. They just need to keep plugging away and they will find a breakout star or an angle that will blow up big.

Anybody that takes off in NXT will be moved to the main roster, so there's a limit to how big that show can get.
Top
Post Reply
192 posts