AEW won the demos again but not by much.

In other words, the total viewership battle is ridiculously close in recent weeks. NXT viewers generally watch a longer stretch of the show than AEW viewers do, but AEW viewers are younger and more “appealing” to advertisers.

If patterns hold, AEW will end up outdrawing NXT once +3 and +7 viewers are added, with younger viewers more likely than older viewers to “catch up” on a show on delay.

The bad news for both shows is that viewership dropped well below recent weeks, excluding the Thanksgiving Eve numbers.

Raw numbers last night were not good, as even coming the day after a pay-per-view and without a big football game, the show set the all-time non-holiday low with 2.05 million viewers.

The only episodes in the modern era to do fewer viewers were shows that aired on Christmas Eve and New Year's Eve this past year.

The show started low, meaning not much curiosity or interest coming off TLC, and as is the case with most wrestling television shows, lost viewers throughout.

What was rare is that in 18-49, besides NFL related shows that always beat Raw, it also lost to three episodes of Love & Hop Hop as well as Below Deck on Bravo in the 18-49 demo.

Overall, Raw was 12th for the night, but only lost in overall viewers to news and football related programming.

Because the open was low, the actual drops were not unusually high, but they were there. First-to-third hour in women 18-49 dropped 20 percent,first-to-third in male 18-49 dropped 24 percent, teenage girls dropped 34 percent, teenage boys dropped 20 percent, and the only reason the drops were not near record breaking was because the major audience, those over 50, were only down eight percent.

Going up against coverage of the presidential impeachment hearings that dominated the cable TV ratings scene, NXT ratings rose this week, averaging 795,000 viewers on Wednesday night.

That number was up two percent from last week. Perhaps more importantly, the show was up 13 percent in the important 18-49 demo. NXT averaged a 0.27 rating, good for 27th place for the night on cable.

The news was not as good for AEW Dynamite. That show averaged just 683,000 viewers overall, down 12 percent from last week. It was the second lowest viewership total so far on TNT.

NXT got its first win against Dynamite in the 18-49 demo this week. Dynamite was down 11 percent in that demo -- to a 0.25 rating -- and finished 31st for the night on cable. That rating was the lowest in the history of the show.

NXT's biggest win was in the 50+ demo, averaging a 0.36 rating to Dynamite's 0.27. But the impeachment hearings also drew heavily from that demo, so it's reasonable to assume the show may have had an even bigger lead with no competition.

Dynamite is off next week due to Christmas but will return on New Year's Day.

Here's a look at the last 10 weeks of ratings for both shows: 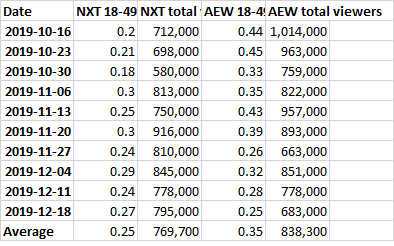 NXT had a stacked show so it's not surprising. They didn't do enough to get Jungle Boy over to make it a must see match with Jericho to the casuals. He needed a few more weeks of build. But I liked Dynamite despite the ending and the alien shit.
Top

WWE made them a fucking *star* in Rhea Ripley and that's going to be a hard thing to fight. AEW needs to seriously pull it together.
Top

Dynamite only started airing in October so it's still early days for AEW. Considering to my knowledge TK and The Elite guys have no or very limited experience in booking/creative/TV production etc that they've only made a few missteps is actually a positive.

They seem to be listening to the audience and are learning from their mistakes. So in 2020, AEW will continue to grow and improve. It might take time for them to work it all out but I'm assuming they have long term goal(s) and had they been super successful it could mean they become complacent. So right now the steep learning curve is a plus since they know where they have gone wrong and can find a way to fix it. Booming wise, The Elite has to be on top. MJF, Lucha Broa, Santana & Ortiz, Jericho have to be at the top too. Then you build up Jungle Boy, Luchasarus, Sammy Guevara etc so they can get to the level where the fans want to see them on top.

With the win/loss ranking system, they should revamp it into a G1 style format where the top two face off for a number one contenders match to challenge for the title. I think they need a mid level title too, like a TV or US belt. So it can build say a Jungle Boy so when he does go up against Chris Jericho or Cody the fans know he has the credentials since he's the US/TV champ.

Creative wise, there's a lot of good stuff historically they can revamp for today. Like with Kenny and Mox they could have done a 2019 take on Flair/Funk instead. So considering they are only a year in I think if AEW have made a few missteps they'll correct them in future.
Top

-- Overnight ratings are in for the December 20 edition of SmackDown on FOX, and the show averaged 2.414 million viewers.

That number was up three percent from last week's near series low of 2.336 million. SmackDown averaged a 0.45 rating in the 18-34 demo last night and a 0.7 rating in 18-49. Both of those numbers were identical to two weeks ago and up 13 percent and eight percent respectively from last week.

In terms of overall viewers, SmackDown trailed everything on the regular networks except for the Global Citizen Awards show that aired on CBS. SmackDown did top all of network television in both of the demo ratings, though the I Love Lucy Christmas special tied Smackdown in 18-34.

Here's a look at SmackDown's ratings and viewership totals since debuting on FOX in October:

But I think NXT was a Best Of 2019 show. But it's good that many people saw AEW because they had a very good show with improved pacing so the show felt like it went by fast (in a good way.)
Top

Yes NXT was a best of 2019/award show. Good to see AEWs ratings back up. 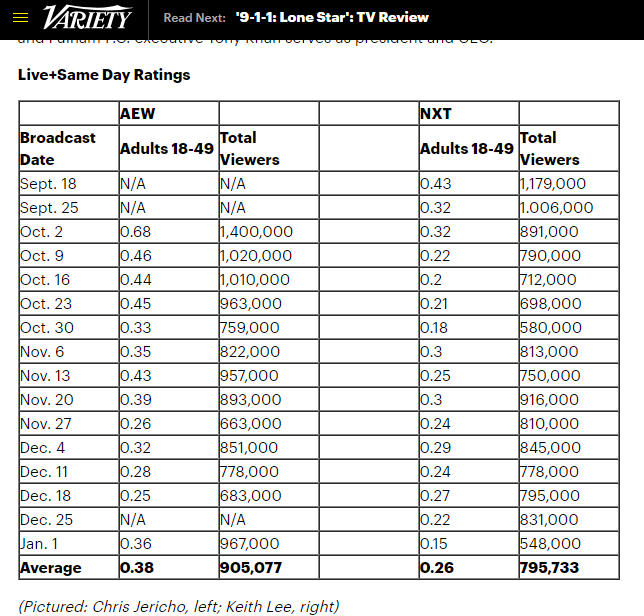 Following the holiday season, the Wednesday Night Wars were back to their normal schedule last night -- and AEW was the clear ratings winner by a big margin.

This week's Dynamite averaged 947,000 viewers, down two percent from last week. The rating in the important 18-49 demo was a 0.36, good for sixth on the night on cable and matching last week's number in that category.

Dynamite did particularly strong with men in that age range, averaging a 0.49 rating.

NXT failed to finish in the top 50 for the night in the 18-49 demo for the second week in a row. After positive momentum since NXT's showing at Survivor Series, the show's ratings have fallen the last two weeks, perhaps meaning that airing what were essentially studio shows on Christmas and New Year's Day killed the brand's ratings momentum.

NXT was up 32 percent in total viewers from last week's year in review episode, averaging 721,000 viewers. That was still the show's second lowest number since October 30.

In the 18-49 demo, NXT finished 55th for the night on cable with a 0.19 rating, up 27 percent from last week. The show had gotten as high as 0.3 in that demo during the Survivor Series build, so that's a huge drop.

Here's a look at the last 10 weeks of ratings and viewership totals for both shows: 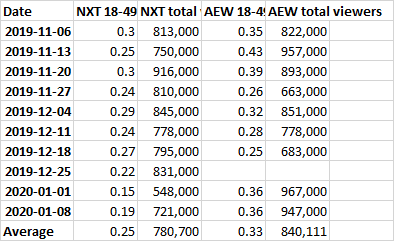 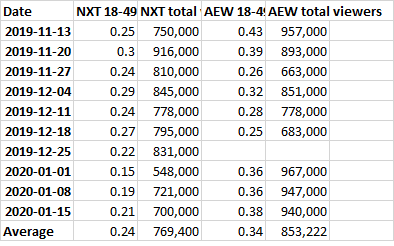 I laughed so hard corn flakes flew out of my nose.
Top

-- Following a week where the show went against the college football championship game, Raw viewership was up almost 17 percent this Monday night, averaging 2.376 million viewers.

The episode opened with 2.548 million viewers in hour one and stayed relatively steady with 2.492 million in hour two. There was the usual big third-hour drop this week, with only 2.101 million viewers on average sticking around for the third hour and three-minute overrun.

The show averaged a 0.83 rating in the important 18-49 demo, which topped all of cable TV. It was seventh on cable in terms of total viewers, trailing only news-related programming but besting an NBA game on TNT that did just over two million viewers.

Year-over-year, Raw was down only 3.5 percent, right in the range of what the show has been averaging in recent weeks.

The 15.7 percent drop from hour two to hour three was the 10th worst the show has done since moving to three hours, so it seems as if the Lana/Bobby Lashley/Rusev saga may not have the same ratings legs as it did a few weeks ago. This week's main event segment was Lana & Lashley vs. Rusev & Liv Morgan.

Here's a look at the last 10 weeks of Raw viewership and their year-over-year comparisons:

-- Raw last night did 2.17 million viewers, which would be among the lowest non-holiday and non-football numbers in the history of the show.

It was down 10 percent from last week's post-Royal Rumble episode and down 14 percent from the same week last year. WWE did have the top three spots in the 18-49 demo on cable, but were down 12 percent to 0.67 in that demo from last week.

With the news coverage of the Iowa caucus, Raw was in 12th place overall, trailing news shows.
The first-to-third hour drop of 13 percent was at normal levels. The drop was 20 percent in women 18-49. The drop was less pronounced with men at eight percent. Teenage girls were down six percent from the first to third hour, teenage boys dropped two percent, and over 50 dropped eight percent.
The three hours were: