I'm not worried about it. Last week NXT had Sasha on and she's pretty underrated as a ratings draw these days. And then this week you had NXT doing a big title vs title match. And AEW didn't have Moxley.

AEW is doing everything right and TNT isn't panicking. So if they lose its not going to kill the company.
Top 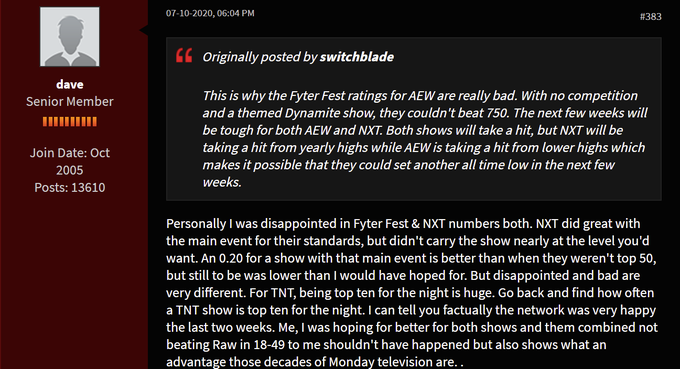 Tony seems happy with the ratings/demos and so does TNT do it's not really an issue as such. But with NXT being on somewhat of a winning streak you can imagine they'll pull out all the stops now to keep it going. Triple H said something about Kevin Owens and NXT Alumni recently and the general consensus I got from it was that they can bring say KO, Bayley, Sasha etc back at any time.

With AEW they don't have that safety net so to speak so they really have to make stars. Orange Cassidy I think has mainstream potential appeal, his gimmicks quirky enough to get some attention. But nowadays there isn't the huge OTT gimmicks of the 80s like Hogan, Piper, Dusty, Flair, Macho etc that drew non fans in.

In ring product really is an afterthought in that regard. You need big personalities with charisma to draw in the non-fans, even the lapsed fans. Because I imagine during both the Rock & Wrestling era and Monday Night Wars a lot of folks tuned in not for the wrestling itself, but the storylines & characters.

AEW doing a nostalgia tribute to that era would be counter productive since it never worked for WCW or TNA. But watching their ads for their action figures on BTE when Kenny, Hangman and the Bucks were doing a OTT version of their characters I think worked better. So maybe the key is playing more exaggerated versions of their current characters.

More character development would help to to get the audience invested in them too. There also need to have a hot angle like WCW had with the nWo. If he wasn't loyal to Vince, John Cena coming in doing a Hollywood Hogan style heel turn and feuding with Kenny & the Elite could maybe be a big draw. Outside of that I think they just to need to focus on putting on the best shows they can.
Top

That's lower than the worst Raw when Nitro was killing them in 1996, so not just worst modern Raw rating like the others have been.
Top

Bryan and Mike mention AEW and NXT were up against UFC on ESPN & NASCAR so those ratings will likely be down too.
Top

Moxley was the missing piece the prior weeks. Big Mox = ratings. And the match with Brian Cage was very good.
Top

Ahahahahaha WWE's ratings are crashing AEW is kicking their ass and all is right in my world today.
Top

Ocelot wrote: ↑
Fri Jul 17, 2020 9:48 am
Ahahahahaha WWE's ratings are crashing AEW is kicking their ass and all is right in my world today. 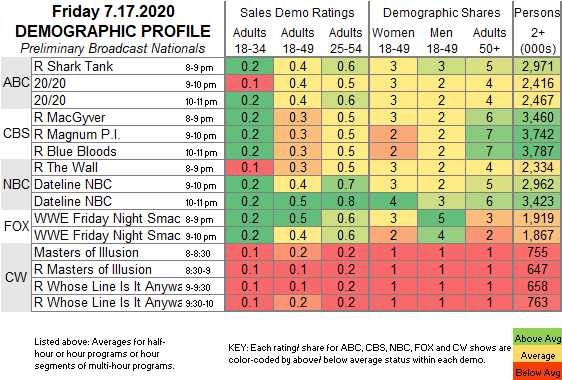 Raw last night did the second lowest audience in the modern history of the show and tied the May 4 episode for the lowest ever in 18-49.

Overall, this could be considered the most sobering number in show history.

The show averaged 1.63 million viewers and a 0.46 rating in 18-49. Total viewers were up four percent from last week's record low viewer number, and 18-49 was down four percent. Really it was a far worse number given it came a day after a pay-per-view that was designed for curiosity and to build Raw more than usual. It was also heavily built around the Randy Orton vs. Big Show unsanctioned match that had been promoted for weeks. The third hour, with Orton vs. Big Show, did a 0.42 in 18-49, the lowest rated hour in 18-49 in the show's history.

In theory, next week's show with two title matches should do better, but that's a hot shot and even if it helps slightly, the pattern long-term is not good.

In total viewers, the 1.54 million third hour beat only the 1.50 million for last week's hour three.

Still, television is changing. Raw was in 21st place overall, fourth among non-news shows. The only shows that beat Raw besides news shows in overall viewers were three episodes of 90 Day Fiance on TLC. The only shows that beat Raw in 18-49 were two of those episodes and Below Deck Mediterranean on Bravo, while the third 90 Day Fiance tied Raw for fourth place in the key demo.

Raw had a stronger first hour audience based on PPV curiosity, likely related to the interest level in the Rey Mysterio match. Once that was covered, the audience first-to-third hour decline was 12 percent, a normal level figure, but higher than in recent weeks.

A comparison with last year this week is misleading. Last year's Raw this week was the Raw Reunion show with Hulk Hogan, Steve Austin, Ric Flair and Shawn Michaels advertised as all appearing. Raw was down 47 percent in viewers, 60 percent in 18-49 and 76 percent in 18-34 from that show.