I think Austins bit was the most entertaining part of the entire show, thank god he made it there or I'd have been better off going to bed early
Top

The answer is obviously yes.
Top

-- At least for this week, whether it was people needing entertainment or a combination of airing the Royal Rumble and having Steve Austin, Undertaker, and Edge on the show, a Raw almost devoid of first-run wrestling did 2.34 million viewers.

It was the best number for the show since February 17, and up eight percent from last week.

Raw continued its daylight savings time pattern of the second hour being the highest rated, perhaps because of the re-airing of this year's men's Royal Rumble match. Austin was saved for last, and there was a very significant second to third hour drop of 15 percent.

The first-to-third hour drops in the key demos were not far off what a normal show would get, with women 18-49 down 11 percent from hour one-to-three, men 18-49 down 13 percent, and teenage boys down 19 percent. Teenage girls actually grew

Raw was 14th for the night overall on cable with the news shows on CNN, Fox News, and MSNBC doing well above usual numbers.

Raw was down 13 percent from the same week last year.

That austin promo exposed how scripted-to-hell everything comes off, imo.
Top

If the Coronavirus lockdown is still in place, I might start up my WWE Network thing for a month again just for this. And also to see how awk the biggest show of the year looks with less paying fans than a 3rd tier indy.
Top

Roman will win to an empty arena. Best crowd relaction he'll have ever gotten.
Top

Footage of Braun driving a Kia

3 months of the Network for free.

It works,I just did it. Just remember to cancel it in the 3rd month.
Top 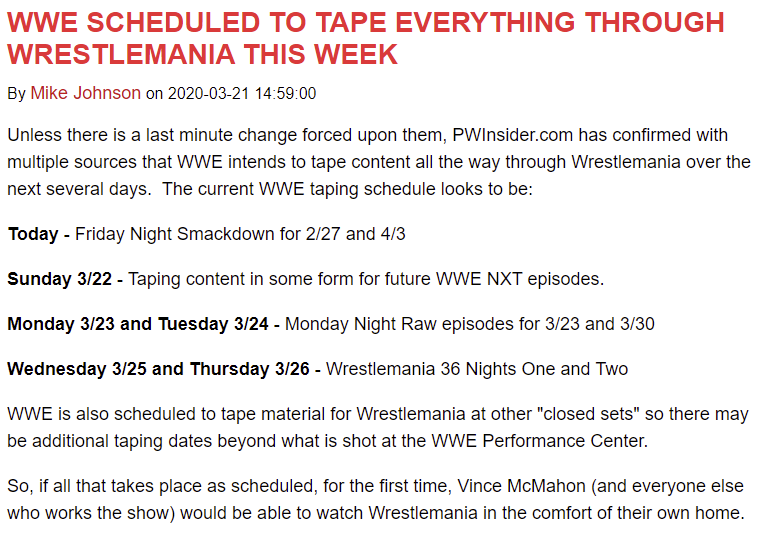