Earlier this week WWE announced that Eric Bischoff had departed the company and his role as executive director of SmackDown. It was then reported that he was fired and that Bruce Prichard had been promoted into his former role.


Prichard and Bischoff go way back and Prichard still hosts his podcast Something to Wrestle in which he talked about his friend's departure.

"First of all, Eric is a friend of mine. He's a good friend of mine that I love personally and professionally and I was sad for the news that came out this past week on a professional level and on a personal level. I want to wish Eric the absolute best," Prichard said on his podcast.

"Eric and I aren't…'Oh my God Eric is gone! I could never talk to him again.' Absolutely not and sometimes in business things happen for whatever reasons and you don't know the reasons but you have to move on. But I do believe Eric Bischoff is one of the smartest guys I've ever met and worked with. I think he's one of the nicest guys and he also is a human being."

On the segment prior to this one, Conrad Thompson asked Prichard to reveal something about Vince McMahon that most people don't realize. Prichard replied that McMahon is a human being like everyone else and just like Eric Bischoff.

"So when you sit there and you make comments through a keyboard or phone and it's a faceless, random thing, remember that you're making comments about human beings. You're making comments about real people that have families. Yes, we're in the public eye and I get that…but also remember it's real life and we are human and we do have families, and believe it or not, we have feelings," stated Prichard.

"I want to publicly wish Eric the absolute best in business, life and everything else because he's a good friend and I'm proud and happy to say that he's my friend."


Taker is a big star in Saudi Arabia. Which surprised me because given how religious the country is I didn't think they'd take so well to the undead demon guy.
Top

-- A writeup in this week's edition of the Wrestling Observer Newsletter sheds new light on the extent of WWE's TV woes in the UK.

Raw and SmackDown's British numbers aren't always circulated in wrestling media so this makes for some interesting reading. Per the report, the 14 October Raw drew 38,000, down 10,000 from the previous week's show featuring Tyson Fury, who is a huge star in his home country. The 18 October SmackDown compelled 23,000 to tune in. Then, on 21 October, Raw drew just 3,000 viewers.

This number is so low that Meltzer claims "people thought it was a computer glitch," but the data has since been confirmed legitimate. Naturally, people within WWE and Sky (their broadcaster) are stunned.

For context, Impact wrestling's 18 October episode had 77,000 viewers in the United Kingdom, which is approximately ten times their usual average in the US. AEW Dynamite, meanwhile, did a whopping 232,000 on ITV on 14 October.
Top

The thing with Fury is he's not special because you just saw him box. Mike Tyson was special because he had been out of the public eye since the Holyfield fight and he didn't box again for another year after Wrestlemania. Ronda Rousey is special because she's retired so WWE is the only place to see her. Nobody wants to see Fury have a bad fake fight when they just saw him have a good real fight last month.
Top

3k seems weirdly low, even if Fury isn't a draw to wrestling fans.

If that 3,000 number is legit, that's terrible. Sky Sports is a subscription channel whilst Impact and AEW are on free to air channels.
Top

It's so weird. He doesn't even have a smiling gimmick like Bayley or somebody. It makes no sense why they gave him that design.
Top 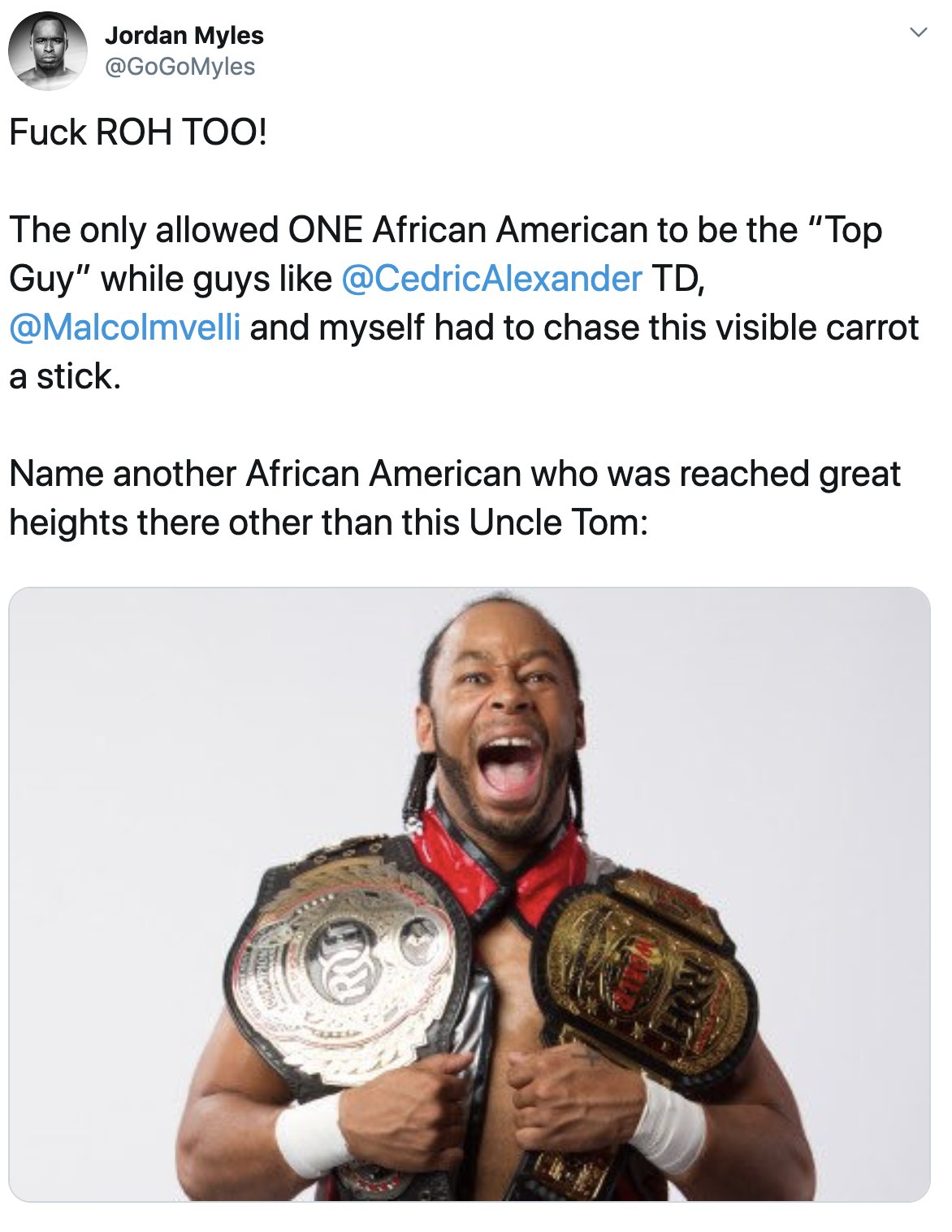 Now I'm wondering if this is a worked shoot angle to get people talking. Or at least a real situation they decided to work into an angle.
Top


The 31-year-old Myles took umbrage with a t-shirt design Saturday that was compared to blackface imagery, saying that if that was Vince McMahon and Paul Levesque's vision for him, it was a slap in the face to all African-American wrestlers, fans, and supporters, He remained active on Twitter throughout Sunday, prompting supporters to change their profile pictures to black and white in protest among other retweets of support for his position.


Looks like nobody is backing him up because he's been a dick.
Top

They immediately deleted this 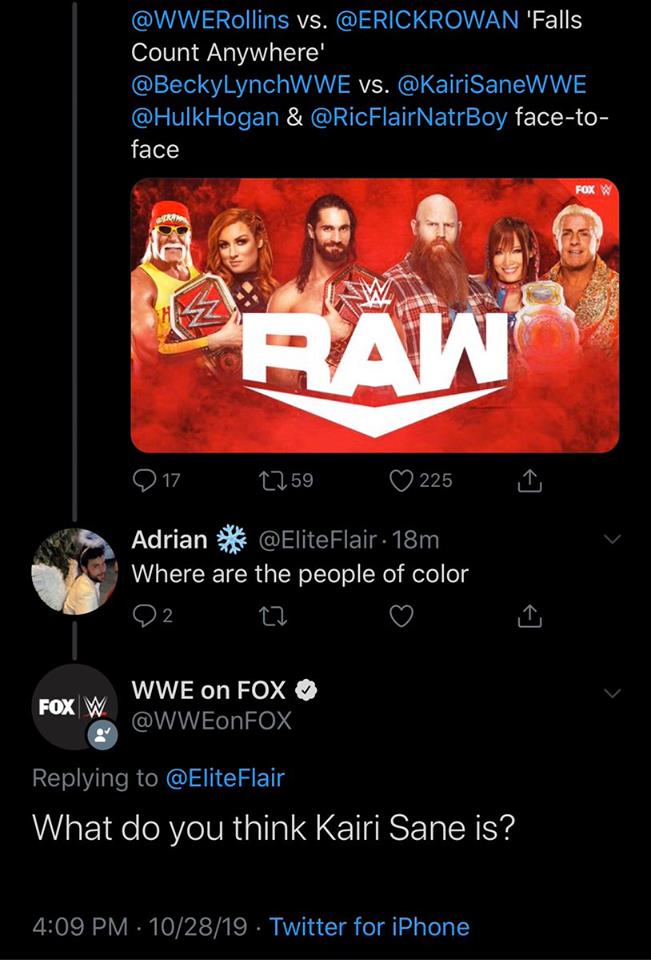