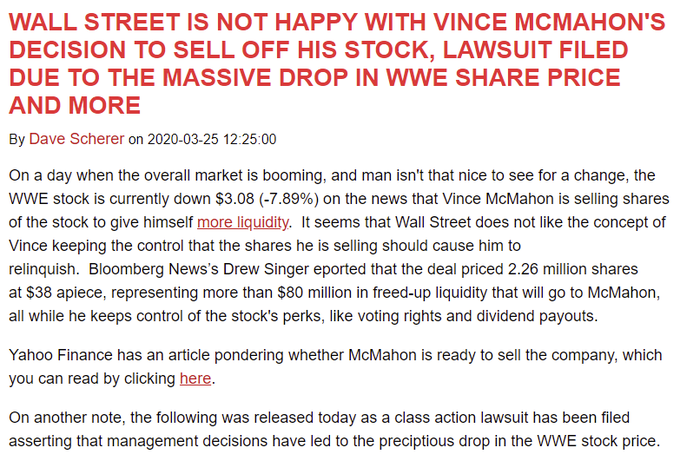 He should have worn the belt.
Top

damn if I'd realised how long that womens title match recap was I coulda watched another full episode of Picard, at this rate channel 5's recap show is gonna have the entire Raw in it withing a week or 2
Top

So is Wrestlemania gonna be free to watch on the Network? Because if so I will totally let you people take great pleasure in my suffering and watch both days on Sunday.
Top

WM is going to be on the Network. Both nights.

rumours of shutting down after mania for the duration of this virus stuff have appeared, among other things in this vid that covers some aew bits as well

Shit.
Ok so you all can enjoy my suffering as I watch Wrestlemania.
FML
Top

So for the hell of it I watched the men's Royal Rumble from 2020 and I have to revise my opinion a little bit. I think eliminating Reigns actually got MacIntyre over like he needed to be to be a main eventer, which means I like this Rumble way more than I did upon first viewing.
Top

Said I would watch both nights and I meant it. Here's night one for the two of you that care to read it. I'm just gonna give overall thoughts on the matches versus trying to write as they happen. If anything happens in between matches that I deem interesting, I might say something too.

This pirate opening is poopy and it never fucking ends.

The arena, the host, no fans....this is just bizarre as shit you guys. This is surreal to see.

Alexa Bliss/Nikki Cross vs Kabuki Warriors - Call me fucking crazy but this was a pretty damn good match ((I can't exactly punish any match for lack of heat or pop, which feels fucking WEIRD)). Nothing I would change about this at all. *** plus an extra 1/2 for Nikki bearing her amazing large boobs so ***1/2

King Corbin vs Elias - Just a match, nothing good, nothing bad. Just...bleh. **

Shayna Basler vs Becky Lynch - *REALLY* good match, a couple of small flubs but the facials, combos, psychology, and hard work were all there and I'm in a forgiving mood. I really like this Basler girl - great worker and great look, like some kind of wrestling demon without going overboard. Basler's performance after the match sealed it for me - just a look of heartbroken disbelief. ****

Daniel Bryan vs Sami Zayn - This was so exciting that I fast forwarded through to the finish after about ten minutes of sub-Memphis stalling. And it didn't exactly make me want to go back and watch the rest. DUD

Kofi Kingston vs Jimmy Uso vs John Morrison - Mess of a match, some ok spots but no real flow. Morrison worked hard so **

Seth Rollins vs Kevin Owens - One thing I liked right off the bat - they worked WITH the lack of crowd and noise. I liked the effort and the false finish with the timekeeper's bell although I think they should have just made it a no DQ match from jump. This match could have used a bladejob or two but this was ok. Call it ***

Goldberg/Strauman - They spawned finishers like a Smackdown game, and Strauman had more finishers saved up. Goldberg's bumps looked awkward as hell. *

Undertaker/Styles - Don't give a fuck what anyone else says, this was ENTERTAINING AS FUCK and a fucking epic performance from everyone. Felt like the end of an 80's action film. Five hundred thousand million billion stars.
Top

The women's tag was good. I liked Taker/AJ a lot. Everything between those matches didn't work as well due to the lack of crowd but none of it was terrible.
Top

I only saw the Boneyard match after seeing people mark out over it and it was definitely a Jeremy Borash production where they gave him a big budget and said go crazy.
Top 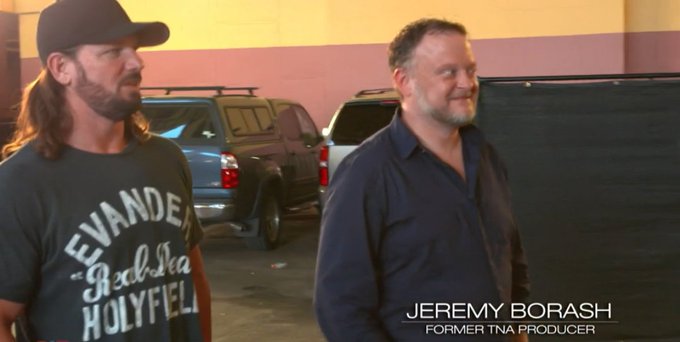 Taker can wrestle at WM until he's 75 if they do it like that.
Top

Even with Borash going gray, he still has the face of an excited toddler.
Top

So is AJ going to be gone a while or is he just going to be on Raw covered in dirt after the Good Brothers dug him out?
Top

He should be gone for a while. At this time it's not that hard to keep people off TV for a few months.

I wouldn't be surprised if he is on Raw though.
Top

I watched the whole thing even though I said I wasn't. Everybody worked very hard, so they get a lot of credit when it's so difficult to have a good match in an empty arena when nobody wants to be traveling to Florida right now. So I don't think it's fair to rank it up against other Manias.

Kabukis vs Bliss Cross was fine. They all worked hard and had as good of a match as they could. I'd also have sex with all 4 of them.

Elias vs Corbin sucked but they tried.

Becky and Baszler was good. It was definitely hurt by not having a crowd. I do not understand why Becky is driving an 18 Wheeler, though. Is she on the WWE ring crew now?

Bryan and Zayn was good, but nothing special. Felt like more of a TV match than Wrestlemania, and possibly Daniel Bryan's last Wrestlemania.

The ladder match wasn't great but kudos to them for trying. Taking those bumps without the adrenaline of feeding off of crowd energy must suck.

Seth and KO was pretty good. But again it's another match that felt wrong without a crowd.

Goldberg and Braun was awful. Worst match of the year contender. Seriously, they killed The Fiend for this shit? I know Roman was going to win this, but they should have had Goldberg retain and wait for when they can have a big crowd again. Nobody cares about Braun Strowman. He had something 3 years ago, but it's long gone.

The Boneyard Match was fun. As everyone says it's the climax to a weird 80s action movie. They looked like they were having a lot of fun doing it. It was the perfect thing to do during this time, so whoever came up with the original idea to do it deserves a lot of credit. Whether that's Heyman, Borash, HHH or even Vince (but doubtful it was him.)
Top